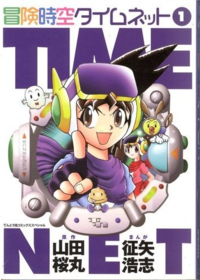 Bouken Jikuu Timenet (Japanese: 冒険時空タイムネット) is a manga created by Sakuramaru Yamada and illustrated by Hiroshi Soya, based on the video games Sanrio Timenet: Kako Hen and Mirai Hen but with only characters, monsters introduced in those games and without original Sanrio characters.

The manga is copyrighted to Timenet, which was a subsidiary company of Imagineer.

The manga is notable for its controversial 'off-color humour' abusing themes including blood, nudity (censored) and near-death experience.

Table based on the one found at Japanese Wikipedia.