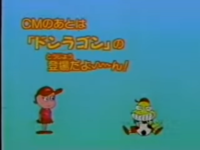 Screenshot of a Donragon commercial

Donragon (Japanese: ドンラゴン) is a television series that ran on the children's Japanese television programme Daisuki! Hello Kitty from October 5, 1993 to March 8, 1994.

The series stars Donragon, a dragon boy and football player who plays in a football stadium somewhere in the universe.

A villainous team known as the Kaijuu Gundan (Japanese: 怪獣軍団) like to issue him a red card even though he doesn't do anything wrong. Additionally, Monster Zakki (a boss of the Kaijuu Gundan) attempts to hit Donragon in the football stadium.

Donragon has a girlfriend known as Madonra-chan whose kiss has the ability to power up Donragon. This surprises a panda character known as Bikkuri Panda.

A Donragon single CD was released on March 18, 1994 (KTDR-2078) known as Boku da yo Donragon!/Minna ni Ichiban. Other Donragon merchandise include Donragon chiyogami (bright coloured paper), a sticker sheet, a soft toy of one of the characters, and possibly a card.[1]