From Sanrio Wiki
(Redirected from Hello Kitty, the official magazine)
Jump to navigationJump to search 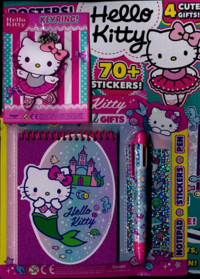 Hello Kitty Magazine, known in full as Hello Kitty, the official magazine! is a licensed European magazine about Hello Kitty aimed towards girls aged between 3-9 years and released every four weeks. It is published by Kennedy Publishing.[1]

It is edited by Paul Kennedy, published by Jo Ford with Freya Gardner working as editorial staff and Clare Twomey working on the design.

The magazine is distributed by KE Ltd in Bristol, England and as of December 2020 there have been over 130 issues.

The magazines may come with various free gifts, such as "interactive stickers", posters and toys, accessories. Various games and papercraft activities may be found in the magazines.