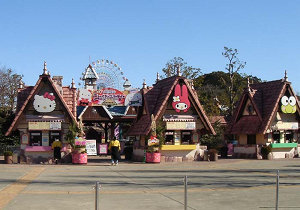 Photograph of Harmonyland from 2005/2006, featuring Hello Kitty, My Melody and Kerokerokeroppi houses.

It is one of two Sanrio themed amusement parks, with the other being Sanrio Puroland.

The amusement park features various attractions, live shows, food and drink and shops. It is partnered with Beppu Bay Royal Hotel, which is a relatively short distance away from Harmonyland.

Harmonyland is known for the White Bird.