Toki no Roujin (literally "old man of time" or "time's elder") is a third party Sanrio character introduced in the Game Boy games Sanrio Timenet: Kako Hen and Mirai Hen developed by Imagineer, Inspace, Timenet and various others. He is inspired by Chronos; a Greek deity and possibly Sanrio Timenet's themes of past and future (Kako and Mirai).

The Toki no Roujin is a mysterious old man who sent an email to the protagonist of Sanrio Timenet requesting that they enter the world of Sanrio Timenet in an effort to capture monsters and repair the Pillar of Time, responsible for the flow of the past, present and future. He appears many times in the game to talk to the player and support them.

He secretly has resentment for kids, probably cannot understand them (an analogy for conquering time? would it create a paradox to see a new generation in a parallel universe? (Earth?) or just stereotypes of old people and how they see kids and 'the good old days'?). However, this is exploited in the controversial manga with crude jokes (intersecting sadly by the fact his game variant is Roujin; similar to Eros). It is a やれやれ (yareyare) moment for him; that he will trust the protagonist, but only because he must and maybe even has shame it came to this all because of Monster Zakki (secretly White Zakki)'s distress, but he is not a narcissist; just may be hard to understand, and can understand her cry (she too is of immense power; corrupting Toki no Roujin's world).

Timenet is 'his' world, perhaps he literally even created it according to the Japanese text at the beginning of the game.

The Toki no Roujin appears in the manga series Bouken Jikuu Timenet based on Sanrio Timenet and produced by Timenet. He took the protagonists Tōru and Ēru out of the human world to restore the Pillar of Time.

He wants to support Tōru and Ēru but tends to act inappropriately, and he is shown to get angry. In the first chapter (Act 1, "Mysterious World"), he called Unchinbōya, Hyūpo and Pikapochi idiots for not realizing they are monsters.

He is the subject of crude or distasteful 'humour'. He is shown to drink liquor and is often shown without clothes on or only shorts. Tōru also inadvertently found him on the toilet in the second chapter (Act 2, "Door to a Different World").

Earlier in the second chapter, he is shown to not understand children. Before taking Tōru and Ēru outside of the human world, he startled them by appearing through a wall in their school. He kissed Tōru because his book on kids said that a kiss was a sign of deep affection, but he was confused when he did not appreciate it.

In Act 10 ("To the Future"), Tōru lost his temper with the Toki no Roujin and attacked him. 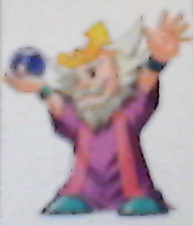 The Toki no Roujin seems to return in the games Space-Net: Cosmo Red and Cosmo Blue developed by Timenet. This is a game not necessarily based on Sanrio, but featuring characters from Sanrio Timenet, where he is found on the Orange planet of the Rainbow System. He reveals that his family name is "Chronos 107".

After the player listens to the story of Solare's queen "Isis" (whose name is possibly based on ancient Egyptian Goddess Isis; a goddess of afterlife assistance, 'the mother of all', worth stressing: Athena is a similar archetype but she specializes in weaving, mathematics, and seemingly paradoxically war and how unfortunately it is necessary for change at least for now; also Xōchiquetzal (we are not sure of a list of deities in Timenet media yet)), Chronos 107 tells them about the Taiyou Mirror that will show one's true identity. The player eventually has to battle a fake Chronos 107, who is the disguise of Zonzora.