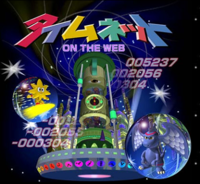 Promotional logo and artwork showing two of its characters

Timenet was assigned to work on video games and possibly PC software, and played a role in the development of "Timenet Characters" (Japanese: タイムネットキャラクター). These likely include the original characters used in Sanrio Timenet: Kako Hen and Mirai Hen and newer characters introduced in Bouken Jikuu Timenet, Space-Net: Cosmo Red and Cosmo Blue. Timenet is still listed as part of the Imagineer Corporate Group as late as 2005.[2]