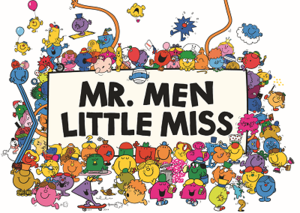 Mr. Men and Little Miss is a franchise currently owned by THOIP, a subsidiary of Sanrio which began as a book series.

The Mr. Men and Little Miss books introduce characters with personalities based on their names; for example, Mr. Strong is the strongest man in the franchise, and Mr. Happy is a very happy character. Often the stories end with the characters getting their needs met, or a moral lesson.

The books have since been followed by multiple animated television series; including Mr. Men, Mr. Men and Little Miss and The Mr. Men Show.