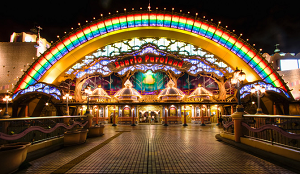 Sanrio Puroland (Japanese: サンリオピューロランド) is a Sanrio themed amusement park that was opened on December 7, 1990. It is located in Tama New Town, Tokyo, Japan.

It is one of two Sanrio themed amusement parks, with the other being Sanrio Character Park: Harmonyland.

The amusement park hosts various attractions such as rides, musicals and restaurants and has featured many popular Sanrio characters such as Hello Kitty, My Melody, Gudetama, The Little Twin Stars, Jewelpet, and Fairilu.

There is also a Japanese video game for the Game Boy Advance known as Sanrio Puroland: All-Characters.

The following are activities at Sanrio Puroland as of September 2016 (source).